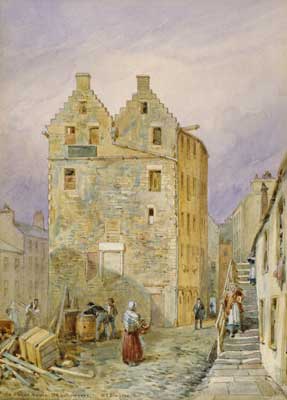 As the modern period progressed, Glasgow emerged as Scotland’s pre-eminent industrial and commercial city, and this was in no small part due to its situation as a colonial hub.  From the 17th century onwards, colonially-produced cash crops and raw materials like sugar, tobacco and cotton became the foundation of the city’s trade and of its emerging manufacturing and processing sectors.

Glasgow’s first colonial fortunes were made in sugar, which was imported from the Leeward Islands from the 1640s onwards for processing and sale.  The manner in which this trans-Atlantic enterprise affected particular lives and localities can be seen by analysing case studies, such as the operations of William McDowall (Nisbet 2009).  McDowall was born in 1678 and, in the early eighteenth century, established himself as a Glasgow sugar merchant and Caribbean plantation owner.

William Simpson’s painting ‘Old Sugar House, 138 Gallowgate, circa 1845’ indicates the character of the sugar processing factories which were constructed in the 17th century in association with Glasgow’s emerging colonial economy © Culture and Sport Glasgow (Museums): www.glasgowlife.org/museums

McDowall and his contemporaries had a material impact on the character of Glasgow and its economy.  This is perhaps most obviously considered in terms of the various sugar processing factories which are known to have been erected in the city from the 1660s onwards.  These processing works indicate that Glasgow’s manufacturing sector was changing significantly in the century or more before the ‘classic’ Industrial Revolution of 1750 onwards.  None of Glasgow’s sugar houses survive above ground today, but future excavation may throw light on their character, as may the investigation of secondary industries: recent work at the Auld Pighoose pottery production site on Gallowgate (NMRS No. NS66SW 946) has recovered ceramic cones made for use in sugar processing.

Beyond their economic activities, sugar merchants like McDowall presented themselves through their town houses: McDowall’s Glasgow home from the 1720s was the Shawfield Mansion, built in 1712 for Daniel Campbell, another sugar merchant, and later sold by the McDowall family to fellow colonial merchant John Glassford.  The Shawfield Mansion is widely known amongst architectural and city historians and frequently cited as the city’s earliest ‘colonial’ villa and an exemplar of neo-Palladian architecture.  To complement their town houses, many merchants developed country estates and McDowall was no exception: he purchased the Castle Semple estate in 1727 and soon set about Improving it by constructing of a new neo-Palladian mansion, laying out formal gardens and beginning works to drain Castle Semple Loch.

McDowall owned an estate on the other side of the Atlantic as well: the ‘Canada’ plantation on the Caribbean island of St. Kitts.  The archaeology of this estate includes its industrial component – sugar crushing machinery and associated mill buildings, windmills to power the works, chimneys and boiler houses associated with the heating of the sugar juice, facilities for packing and shipping the semi-processed sugar and facilities for converting the molasses and poorer quality sugar to rum – and its domestic component, whether that be the main plantation house, accommodation for the plantation staff or the village which housed the slaves who undertook the bulk of the labour.

The links between both the Caribbean and Scottish nodes of this network extend far beyond the movement of the sugar itself.  The industrial process of processing the sugar straddled the Atlantic, beginning in St Kitts and continuing in the sugar houses of Glasgow.  Various other Scottish and British industries supplied the Caribbean plantations with goods: bricks for construction, lime for clarifying the sugar juice, salted Clyde herring, which was a staple of the slave’s diet (food was imported because the plantations themselves were given over largely to commercial sugar production).  There are architectural similarities between the buildings of colonial Glasgow and Scotland and those of the Caribbean and American plantations and towns with which Glasgow was connected.  And the slaves who worked the ‘Canada’ plantation were bought from another Glasgow merchant, Richard Oswald, who operated a slaving fort on the Sierra Leone delta.

Return to Section 3.2 Colonialism and Empire