While fishing was a major source of local food (see 10.4), in many areas large-scale commercial sea fishing became an important Highland industry on both east and west coasts, particularly to take advantage of the herring (Smylie 2011). Information about commercial fishing in the Highlands is scattered across a number of sources including Gray (1978), Munro (1978; 1986), Maudlin (2007) and Smylie (2011) with regional studies including Mowat (1981), Munro, J (1994), Alston (1999), Coull (1996; 2002) and Poole (2010). Newspapers, government reports, fishery officer correspondence and estate papers all provide detailed sources for this important industry.

Commercial scale fishing required ways to preserve fish. This was usually through the use of foreign salt (Harris 2000), but the Brora saltworks (Chapter 10.5.3) were also used. In some areas kilns, were also used for smoking, for example at Thurso (MHG1473) and Lybster (MHG36602). In recent years more attention has been focussed on some Highland fishing stations, as there are well-preserved remains of fishing towns at Pultneytown (Wick), Ullapool and Helmsdale and at fishing stations such as at Torridon, Isle Martin, Tanera in Wester Ross and Lochinver, northwest Sutherland.

For example, a project by NoSAS investigated the fishing station at Torridon. In 1785 the Torridon Fishery Company was set up by the local landowner Kenneth Mackenzie of Torridon. He erected a curing house modelled on North American structures, said to have been the first of its kind in Scotland (Knox 1787). The Company was beset by difficulties, but herring catches continued in Loch Torridon and are mentioned in the 1840s, with the buildings being in use until the end of the 19th century. A limited number of sites connected with the fishing industry were identified by the survey, including the footings of a stone built curing house (MHG49629), a possible salt pan (MHG28569), several cleared beaches, jetties and shoreline bothies (NoSAS nd). NoSAS also surveyed sites on Loch Hourn, uncovering a large number of sites related to fishing (Case Study Loch Hourn survey).

The fishing industry required barrels and baskets, the construction of which required access to wood, presumably managed woodlands, and specialised craftspeople. Interestingly, when Isabell Burton MacKenzie, organiser for Highland Home Industries, went to Skye in 1912, she visited a local industry making baskets for the herring industry. They could not source enough local willow, and were importing willow from Holland and Germany (Jones 2020, 77–8).

A community project involving historical research and excavation is investigating the fishing station on Isle Martin, Wester Ross that was established in the 1770s. When combined with research into nearby Tanera Mor, established in the 1780s, it will provide insights into the set up and running of these structures (Cathy Dagg pers comm). Research is now showing that herring caught in the Highlands, including in Wester Ross, were part of a large scale trade that exported ‘white’ salt-cured herring and ‘red’ smoked herring to overseas markets, including West Indian slave plantations (Alston 1999, 225).

Herring was unpredictable, but immensely profitable and was important to many coastal communities (Case Study Sarclet Fishing Village). Wick in particular was a major centre on the east coast, but other ports such as Helmsdale had periods marked by intense activity. Catches were reported in local newspapers even into the 20th century. In the 19th century there was a short, but economically important seasonal migration of fishermen and women from the west coast to the east to participate in herring fishing. Women and girls were employed to gut and salt fish, and in due course they came to follow the catches as the fish moved from Scotland to eastern England. In 1826 in Cromarty alone there were at least 200 women involved in the season (Alston 1999, 75).

On the east coast, various fishing villages have been identified, both from documentary evidence and remains (see Alston 1999, 76–77). Some such as Avoch on the Black Isle still retain their close-knit identity and maritime focus (Mowat 1981, 48ff). The old fishertoun at Nairn is well preserved and the local museum provides much detailed evidence of its local importance (Dennison and Coleman 1999). More work, and indeed excavation, of abandoned fishertouns could provide more information about this type of settlement in the Highlands.

Inshore fishing was also important, carrying on from the medieval period (see Chapter 9.5). The salmon fishing industry in particular was very important (Martin 1995; Bangor-Jones 2000, 67), and a PhD in progress by Jane Thomas (University of Highlands and Islands) studies the salmon fishing in the inner Moray Firth from around 1500 to 1800. From about the 1820s salmon bag-net fishing took off. It was eventually banned from estuaries and located on the open coasts where salmon bothies may be found, sometimes in association with icehouses. The evidence for fishing on inland waterways is grossly under-researched in all of Scotland, but in the Highlands especially.

Tidal fish traps (yairs) can be seen along much of the Highland coastline. These simple structures were remarkably effective, used for salmon and other inshore fish, though the traps caught fry as well as mature fish. Constructed of foundations with wooden stakes and branches or wattle superstructure, the curved outline of many yairs can still be seen outlined in seaweed. Documentary sources show that some of these structures date from at least the 17th century. A large number of yairs were erected. Most remains on the west coast would appear to date from the 1820s and 1830s (Malcolm Bangor-Jones pers comm). In a study area of the Beauly and Cromarty Firths, 62 fish traps were recorded (ScARF Marine & Maritime Case Study: Intertidal fish-traps in the inner Moray Firth). A PhD by Alistair Stenhouse (University of Aberdeen) is currently investigating the archaeological remains of fish traps in the Highlands.

Stake nets were also employed from the first half of the 19th century; again these also caught young fish, which had an impact on river fishing. As a result, such fixed practices were banned in legislation by the mid-19th century and were effectively prohibited within the estuary limits as set under the authority of the Salmon Fisheries (Scotland) Act of 1862 (Alston 1999, 71ff). Remains of stone dykes into which cruive traps (wicker salmon traps) were inserted may still be found in some locations.

The use of yairs and nets had resource implications as well. Work is needed to investigate the materials used and types of wood chosen, again with attention on managed woodlands. Their use also affected daily life, requiring frequent tending, maintaining and repairing to avoid predators taking the fish (Grant 2018, 276–77).

Landowners wishing to export salmon relied initially on salt, but then George Dempster of Skibo Castle began using ice to export locally caught salmon to London (Alston 1999, 73); sometimes they were parboiled first in boiling houses, such as at Invershin, Sutherland (MHG12890; Hume 1977, 36). A kiln recorded on a 1788 map of Tarradale, Easter Ross, may have been for smoking salmon (Eric Grant pers comm).  A number of icehouses survive on the Highland coasts; many were used for the fishing industry, and many are in poor repair. 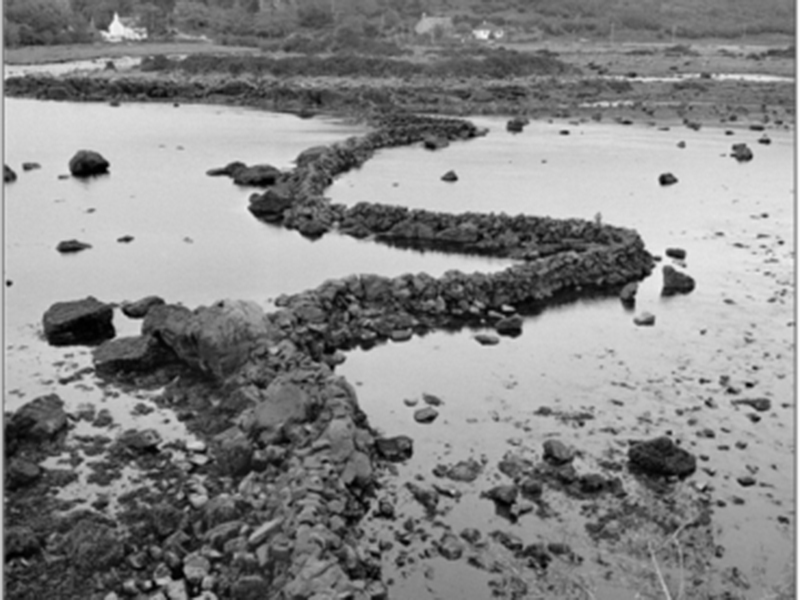