Duns, brochs and hillforts are the classic settlement form of the area, and there have been many excavations in the post-war period (see Chapter 7: The Iron Age). Several of these opportunistically produced early medieval evidence of both occupation and/or construction. These include Balloch Hill, Dun Chonallich (CANMORE ID 22772), Eilean Righ 1 (CANMORE ID 22857), Ardifuir, Kildalloig Dun, Kildonan (CANMORE 38756), Dun an Fheurain (CANMORE ID 22954), Dun Fhinn, Ugadale Bay, and Leccamore (summary in Crone and Campbell 2005, 120-2, Table 4). Indeed, as Alcock and Alcock (1987) pointed out, there are as many defended sites with early medieval dates as those with iron age ones. However, it was Leslie Alcock’s campaign of investigating sites mentioned in contemporary annals and other documents that put ‘Early Historic’, as he named it, archaeology on a sound footing in Scotland. Two Argyll forts, Dunadd (CANMORE ID 39564) (Lane and Campbell 2000) and Dunollie (Alcock and Alcock 1987), were excavated in the 1980s as part of this campaign, both providing extensive evidence of the importance of these sites associated with kings of the Dál Riata. This was the first programme of early medieval excavation in Argyll driven by a research agenda, and the results showed the value of small-scale interventions in establishing the broad chronology and material culture of defended sites. All these small-scale excavations however, suffer from well-known problems of siting keyhole trenches in sites with complex stone sequences and deep stratigraphy. In particular, no convincing buildings (other than ephemeral turf metal-working bothies at Dunadd) have been identified in any of these excavations. More recently, excavations at Dun Mhuirich (CANMORE ID 39122) (see Dun Mhuirich Excavation: Case Study), Tayvallich, have produced early medieval occupation beneath a long sequence of medieval and post-medieval deposits (Regan 2012, 2013). All of these sites have shown that it is not possible to predict the presence or chronological span of a defended site from the surface form of the enclosures. In no cases do we have any excavation evidence for areas outside of the enclosures which might give a clue as to lower status activities and structures – a project under John Barrett in the 1980s looked at examples of fields associated with duns, but was never published (Nieke 1990, 139). 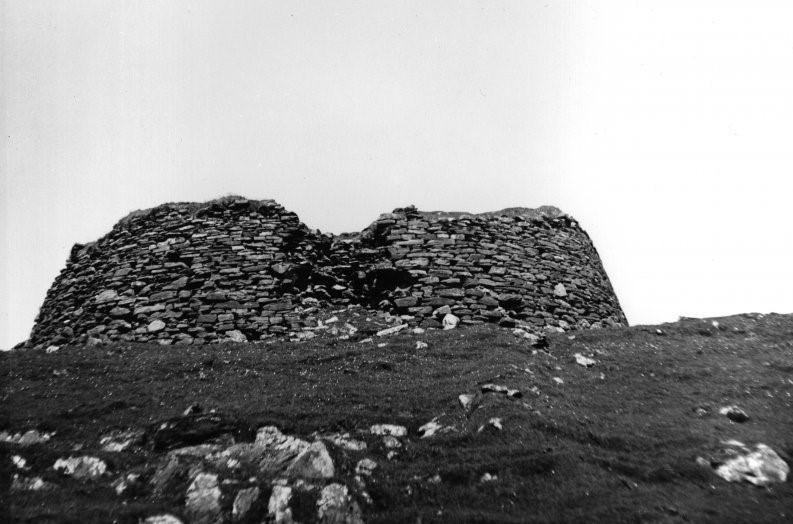 While brochs are characteristic of western and northern Scotland, there are few within Argyll, reflecting a different regional tradition in the Iron Age (see Section 7.4.4). As elsewhere however, broch sites tend to remain foci of settlement in the early medieval period. Two broch sites have been excavated: Dun Mor Vaul (CANMORE ID 21524), Tiree (Mackie 1974), and the unpublished Tirefour (CANMORE ID 23082), Lismore excavated by Simon Stoddart. Recently obtained dates from Dun Mor Vaul confirm a 7/8th-century date for a burial within the broch, which also has a comb and whetstone identifiable as Norse in late deposits (Batey 2002, 185). Tirefour has an external settlement which has produced an outstanding 8th-century pin, and a stone building of the 12th century. As with the forts and duns, both these sites indicate the continuing significance of these iron age sites into the medieval period.