The chronology of the recorded discoveries of early watercraft (including logboats) across the UK reveals an encouraging increasing frequency of such discoveries in recent years, with an implicit recognition that watercraft discoveries are a form of archaeological evidence which can, and should, be investigated by ‘normal’ units rather than specialist teams and institutions. Apart from the continuation of chance discoveries, and their investigation in the current manner, the potential of the following may be recognised:

Ship- and boat-remains in urban contexts Excavation at London and elsewhere (York, Bergen, Trondheim, and Beverley) has revealed the coherent remains of early watercraft (in practice, Viking or Medieval) either retained or deposited behind harbour-walls (which inevitably develop forwards) or in re-use incorporated as coherent units into harbour- and river-walls. The logboats from Springfield and Clydehaugh, Glasgow presumably fall within this category, while the projected River Clyde canalisation works of the 1950s would have blocked in the Newshot Island ship graveyard and the Erskine logboats that were discovered by Helen Adamson. The discovery in a similar situation of the old harbour at Perth is also significant here, while the Dover boat falls within this category. The log-boat found at Dumbuck crannog, discovered in a wooden-lined dock adjacent to the crannog timber platform (see Hale and Sands 2005), is another example.

Areas within Scottish towns which appear significant in this respect would appear to include the following (Table 1):

Table 1: Areas within Scottish towns which appear significant for ship and boat remains

Ship- and boat-remains in areas of major agricultural drainage This same approach may be extended to rural contexts in such low-lying areas with developed artificial drainage systems as the Carse of Gowrie (Hodd 1975), which intrinsically present problems and possibilities similar to those long recognised in Eastern England, the English Fenland and the Somerset Levels. These are types of areas which deserve regular monitoring, notably by ditch-walking.

Ship- and boat-remains near early settlements in ‘shore’ situations Vessels at the end of their life are commonly abandoned close to their area of use, and may be discovered if the area of interest and excavation is expanded to this end. The potential value of the trenching (or possibly geophysical survey) around the base of Dunadd (within the infilled area of the Crinan Moss) is a case in point (Lane and Campbell 2000).

Sub-bottom sonar-based investigations The relatively restricted use of sonar investigation in Scotland includes the illustration of deep water in the West (Sound of Mull) and North (Scapa Flow) Robertson 2007). However, the picture currently presented by the RCAHMS database is that of the greatest number of recorded losses lying within the mud estuaries of the East, notably the Rivers Esk (including Montrose basin), the outer Tay and parts of the Forth. There is considerable potential in the use of sub-bottom sonar systems to indicate the frequency of wreck remains across such areas as the Drum Sands (in the Forth) or Elbow End Bank (in the Tay), although most vessels so revealed would presumably date from beyond the period here covered. The remarkable number of wrecks revealed by pioneering works of this nature across the Goodwin Sands offers an encouraging example (Cloet 1954).

Loch as a research focus There is much to be gained from the detailed multidisciplinary investigation (including excavation, natural history and sedimentology) of a small and shallow in-filled loch, most probably in the South-west, with the potential for a range of structures and finds including metalwork hoards, crannogs which have not been reduced to their substructures, and logboats. 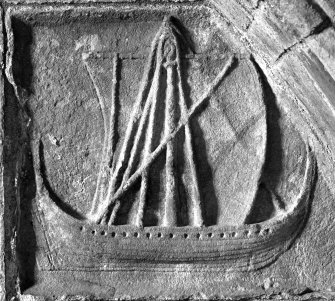