2.5 Summary of Marine Palaeo-studies in Scotland

There is the potential for surviving prehistoric archaeology (10,000 – 5000 years old) most notably to the west of the Western Isles for a distance of some 10km, to a depth of -20m below present OD, and in and among the islands elsewhere (particularly around Islay, Jura, Mull and the Small Isles) along the coast and between S Scotland and N Ireland.  The reasons comprise a complex interplay of changing sea -level and the rebound of the land once freed from the depression by ice loading at the end of the last Ice Age.  The net result of these physical effects is that 10,000 years ago relative sea level was up to 45m lower along much of the coast and this corresponds with the period of early human settlement in the area.  In places this means that considerable areas of submerged land exist.  An investigation of bathymetric, sedimentary and tidal data for the area suggests that the prehistoric land surface, including any associated archaeological remains, may survive in many places.

Any archaeological remains that might be found would be highly significant because early remains are so far rare on the islands.  Elsewhere in Scotland, archaeological material from this time indicates the importance of the coast suggesting that it is along those submerged coastlands that one might expect to find indications of early settlement, and thus, incidentally, providing one reason why so few remains have been found among the outer islands and coast of western Scotland.

Shiant Isles – In 1991 a scallop boat dredged a Bronze Age gold torc from the seabed near the Shiant Isles (Cowie 1994).  This artefact dates to the Bronze Age. The characteristics of the Sound of Shiant mean that this artefact could have travelled here from some distance, but the find is also an indication that similar prehistoric material might occur elsewhere on the seabed, but without suitable environmental context this is unknown at present.

Sound of Jura – In 1981 a group of divers recovered a gold arm-ring from the sea bed near to Ruadh Sgeir at the north end of the Sound of Jura (Graham-Campbell 1983).   This artefact has been dated to the Viking period, probably 10th century AD, and is assumed to have resulted from a loss at sea.  Again it signifies the potential of the seabed for prehistoric remains that relate perhaps to the wider aspects of life rather than to direct settlement.

A reconstruction of sea level for the Bay of Firth and an image of the main mound feature located within it, reproduced courtesy of the Rising Tides Project and Richard Bates

2.5.2 Northern Scotland
Orkney – Bay of Firth, Mainland.  Rumours of a submerged chambered tomb following local diver description provide the only evidence in Scottish waters of a possible submerged landscape (Wickham-Jones and Dawson, 2008). Geophysical investigation and diving in 2009, and 2010 confirmed the presence of layered stone slabbing, isolated large stones and large (up to 40m diameter) geometric seafloor features  in water depths of 1-7m.Seafloor sediment coring in 2011 was undertaken to provide geoarchaeological context to the sites.  Full archaeological investigation will be necessary to determine the exact morphology and possible purpose of these features.

The Rising Tide – Orkney A project to assess changes in former relative sea-levels and the potential for preservation of archaeological material on the sea-bed. Information to date is downloadable from Rising Tides

In the northern sector of the North Sea the fossil evidence is spread more thinly and is more fragmentary. The species of mammal recorded from the Scottish North Sea are (in order of abundance of fossils): reindeer, Rangifer tarandus; bison, Bison sp.; musk-ox, Ovibos moschatus; woolly mammoth, Mammuthus primigenius; red deer, Cervus elaphus; and some woolly rhino, Coelodonta antiquitatis (Flemming 2003).

Artefacts, as opposed to unworked animal bone, from the North Sea are mainly to be found in the southern reaches, from the Brown Ridge area (Loewe Kooijmans 1970-71; Verhart 2004).  With regard to Scotland finds of this kind are limited to a single worked flint from vibrocore number 60+01/46 obtained as part of a BGS programme in the UK shelf some 150km north-east off Lerwick, near Viking bank, in a water depth of 143m (Long et al. 1986).  While it is possible that this find came from an area of dry land and is thus to be regarded as a submerged indication of prehistoric settlement, it is equally possible that it is the result of a loss at sea, either in ancient or recent times.

2.5.4 Potential finds and hotspots on the seabed.
There is great likelihood of finds relating to the Mesolithic (10,000BP – 6,000BP) and Neolithic (6,000BP – 4,000BP) periods on the shallower parts of the Scottish Shelf (down to c.-45m) in areas where the conditions for site preservation (see 2.4.6) can be met. There is also a high possibility of finds relating to the Palaeolithic period, prior to the Mesolithic, especially on lower stretches of the Scottish shelf, though it is difficult to pinpoint hotspots for this at present due to a lack of systematic research. Some known potential hotspots include drowned woodlands and submerged peats. Within Scotland there are many examples throughout the western and northern Isles that allow the potential for submerged and partially submerged landscapes. Notable sites include: Clachan Harbour, Raasay (Dawson 2009, Early Mesolithic lithics and intertidal wood and peats); Skaill Bay, Mainland Orkney; Sanday, Orkney (submerged forest); Borve, Benbecula (Ritchie 1985, intertidal peats); Isle of Coll, intertidal peat (8,800 BP, Dawson et al. 2001). Projects that are aimed primarily at archaeology are currently scarce, however, projects that have studied the shelf and coastal areas for infrastructure development, hydrocarbon exploration, wind farms and aggregate exploitation do provide some measure of archaeological appraisal as part of marine planning guidance. This represents a considerable research opportunity if the various data sets can be synthesized.

Extent of Doggerland project and others around Britain and Ireland, highlighting the potential for future work in Scottish waters and the data available (Fitch et al 2011), image reproduced courtesy of the North Sea Palaeolandscapes Project.

2.5.5 Related Studies to Scottish Waters
Recent research at the University of Ulster, Coleraine has highlighted the previous existence of a low energy strait with various islands between the N Irish coast and the S Hebrides in the early Holocene (Cooper et al. 2002) thus confirming the importance of this area as a potential archaeological hotspot.  Similar examples of the  recognition of settlement opportunities in underwater contexts from the Baltic (e.g. Fischer 1995b) are impressive, and include surprisingly early material. Momber and Campbell (2005) report on a Mesolithic cooking area, complete with hearth, oven pit, burnt stones, and nearby branches and timbers dating from about 7000 cal BC, at a depth of 12m, in the Solent. Quinn et al. (2000) describe on-going work in Northern Ireland; and Fitch et al. (2005) publish the reconstruction of Mesolithic topographies in the Dogger Bank area or the North Sea. Some cross-cutting research networks have already been set up (e.g. the Submerged Landscapes Archaeological Network)

See also the ScARF case study: Submerged Landscapes around the coast of Britain 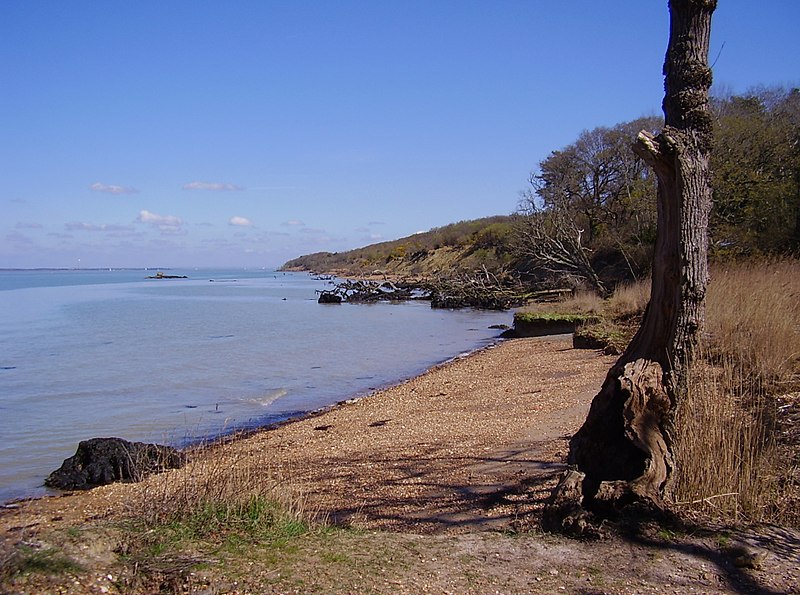 Case study: Submerged Landscapes around the coast of Britain