The development of monument shelters in Scotland dates back to the 1890s. By the 1940s some of these were partially glazed, and by the late 1980s the first fully glazed structures were being developed (Foster 2001; Maxwell 2005).

There were various concerns about the concept of enclosing ancient monuments within glazed ‘containers’. Some were tangible, and remain controversial; these mainly being related to site aesthetics, lack of physical access, and reflections affecting photography. Others were conjectural: that stones would crack, spall or suffer efflorescence as they dried out; or that they would act as ‘wicks’,  drawing moisture and soluble salts up from the ground. ‘Greenhouse’ magnification of diurnal or seasonal temperature fluctuations also raised concerns of material-stressing of the stone. The impact of such interventions on the perceived value of carved stones is also gaining currency (see Science value and material decay: Case Study 8).

Analysis of environmental data recorded internally and externally at Sueno’s and Shandwick Stone enclosures from 1992–2000 showed that the internal temperature fluctuations rapidly followed those outside, with internal nocturnal readings being around + 4 oC warmer than outside, while in the summer months solar-gain increased this insulating effect to +20 oC at Suenos and +30 oC at Shandwick. This resulted in some high internal temperatures, the highest being 58.5 oC recorded at Shandwick during June 1995. Predictably relative-humidity inversely-mirrored temperature, dropping during hotter weather. Internal humidity was always lower than outside, ranging from around 20% lower at midday to 40% lower by 9pm. Although the diurnal and seasonal patterns found at both sites were closely comparable, there were notable differences too. These were primarily due to their differences in internal air volumes and the efficacy of their ventilation measures. Temperature and humidity fluctuations were found to be more frequent and extreme at the Shandwick enclosure where solar-gain was found to be significantly higher due to the smaller internal air volume (approx. 46m3) and less efficient ventilation. Conversely Sueno’s shelter (internal volume 237m3) took longer to heat up and did not reach as high temperatures, while retaining its temperature longer (Muir 2005).

The study showed that while wide temperature ranges were indeed created within the structures, the stones showed no detrimental results from this; no spalling, disaggregation or salt crystallisation was observed during the drying-out process, nor did temperature variance appear to adversely affect the stones.

From a conservation point of view the shelter concept has proven very successful, if using a bespoke design and properly maintained. At Sueno’s Stone, a monument in the care of HES, it has effectively halted the detrimental effects of wind, water and frost action, minimised annual conservation costs, and extended the monument’s existence, while maintaining it in its original location. Conversely at Shandwick, the condition of the monument has declined for over a decade. This is the outcome of using a re-purposed shelter, defective building design, and the challenges for a local trust of actively caring for the monument, including access to funds. There the flooring is breaking up resulting in water ingress, salt contamination and severe disaggregation to the monument’s collar stone.

The glazed shelter concept is still considered a valid one within HES, and has been proposed for the Aberlemno stones in recent years, and indeed is planned for the St Orland’s Stone in due course. 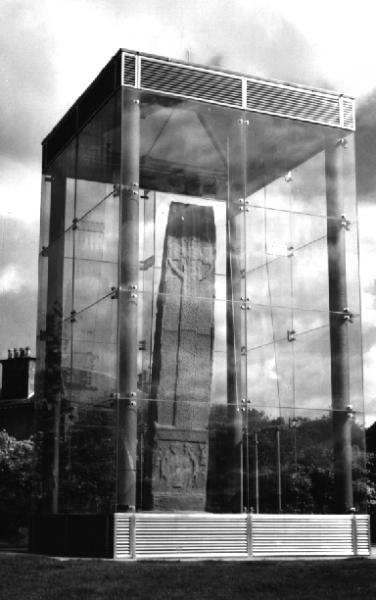