Research is needed to consider both the individual needs of carved stones, since each situation is different, as well as wider and strategic issues. Carved stones like other elements of the historic environment need to have their condition assessed and regularly monitored to identify those at risk (Thomson 2000 has wider relevance), while conservation plans need to also take into account the asset’s cultural significance as well as its public values: a holistic approach is called for. But what carved stones require active conservation and when? What changes should this involve? Who is needed to make this happen? Do we have the conservation and craft skills to effect this? What philosophical questions do these raise?

Conservation organisations will aim to regularly monitor the monuments that they have a direct responsibility for. HES is particularly ambitious in its use of digital technology. This means that it should be possible for them to monitor the condition of targeted carved stones at the micro level (HES Rae Project initiated in 2011: HES 2015). In practice, though, it is challenging to find a way to regularly and scientifically monitor the condition of carved stones, risks to them (including pace of change) and opportunities to address these issues, even for those that are designated, let alone the wider resource. Mega-level changes (to overall form, and shape of a carved stone/monument) and macro-level changes (to the surface overall and overall condition) are visible to the eye, but micro-level changes (to the surface detail, through abrasion and weathering) are not. One question is what role volunteers can play in such processes, with the evidence to date suggesting that trained volunteers are well capable of recognising mega and macro-level condition issues, and opportunities to address them, but can identify micro-level issues at a gross level only, and are less likely to be able to identify opportunities to address these. By contrast, risk can only be scientifically assessed by specialists (outcome of an informal review of carved stone projects involving volunteers by members of EH, HS and project managers in May 2005).

This all makes it extremely difficult to identify priorities for conservation action. Added to this, the majority of carved stones are also in private ownership or in the care of organisations whose prime objective is not conservation, such as the church. With access to technical conservation advice and skills very limited, in both the state and private sector, and ever more limited resources, the outcome is that conservation priorities for action have tended to be piecemeal rather than informed by any overview of where the greatest needs lie from a holistic perspective. Highly significant carved stones can be off-radar, despite high levels of immediate risk to their condition. Even if there is a local champion to progress a conservation project, whether the owner or another party working with the owner’s permission, carved stones that are not publicly accessible (in a garden or other private or inaccessible space) are less likely to attract public funds. Research is needed to establish where the priorities for action lie for carved stones that are not in the direct care of conservation bodies, particularly for those categories of carved stones that we already know to be particularly vulnerable in some way (see Section 5.3.3–5). Research is also needed to find the best ways to engage and support the active stewardship of carved stones by a far broader sector of the population. The necessary management action may in fact be relatively simple to effect with a little effort (Achnaha: Case Study 39)

If a carved stone has conservation needs, what interventions are appropriate? This may involve visible or invisible alterations to the fabric of the stone, introducing new material (how should old be distinguished from new? should a stone be cleaned? Figure 99), changing the surrounds of the stone to provide shelter from weathering, moving the stone to an alternative protected space (what sort of space and how local should this be?), replacing a stone with a replica (how and in what ways should this be obvious? should former location be marked and how? Figure 100) or even creating replicas (analogue? digital?) to curate while allowing the original stone to ‘die’ with the passage of time (cf Walderhaug Saetersdal 2000).

Stone conservation solutions are not yet the match for the problems (Doehne and Price 2010, 75) but the science will continue to progress, and conservators need to learn and do more science. Nonetheless, what is acceptable today will likely be regarded as inappropriate in the future, just as we today are critical of many past conservation actions. Knowledge of past conservation techniques needs to be more widely researched, as well as on a case-by-case basis. Today good records need to be kept, not just of what was done but the conservation planning process that led to the decisions about what to do. These records also need to be shared, with scope for OASIS/HERALD to provide an index to such grey literature, but this will require a buy-in beyond archaeological researchers who already use these facilities. 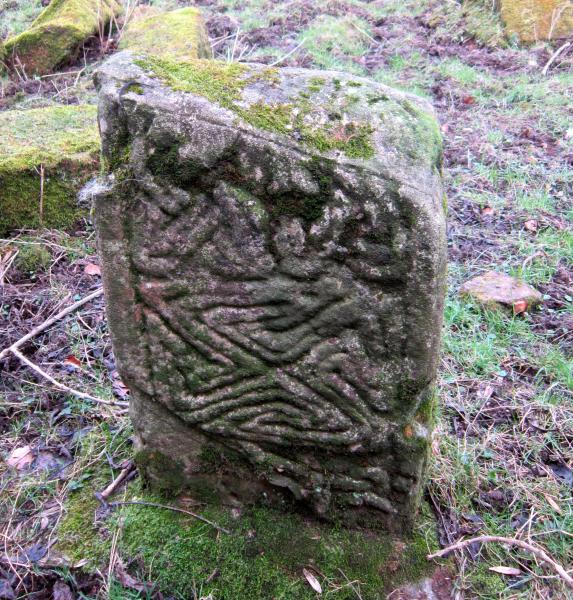 While the present focus is consolidants, the questions of if and how to control biological growths remains a particularly keen issue for Scottish carved stones. How efficacious from a purely conservation perspective are the shelters (Figure 101) and other protective devices that were or are introduced (see Muir 2005; Sheltering monuments: Case Study 17)? This research wants to include new and creative solutions, such as at Rodney’ Stone, Brodie, where a modern wicker artwork provides a wind-break for the Pictish stone, the immediate surroundings of which have been transformed as part of a carefully considered conservation strategy (The Brodie Stone: Case Study 33).

Figure 101: Three early medieval stones in a shelter at Inchinnan New Parish Church. These were moved to the new parish church following the demolition of the old church in 1977. © Sally Foster

Case Study: Auchnaha Cairn in Cowal, and its Cross-Carved Stone 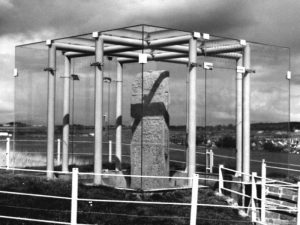 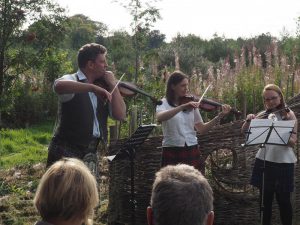