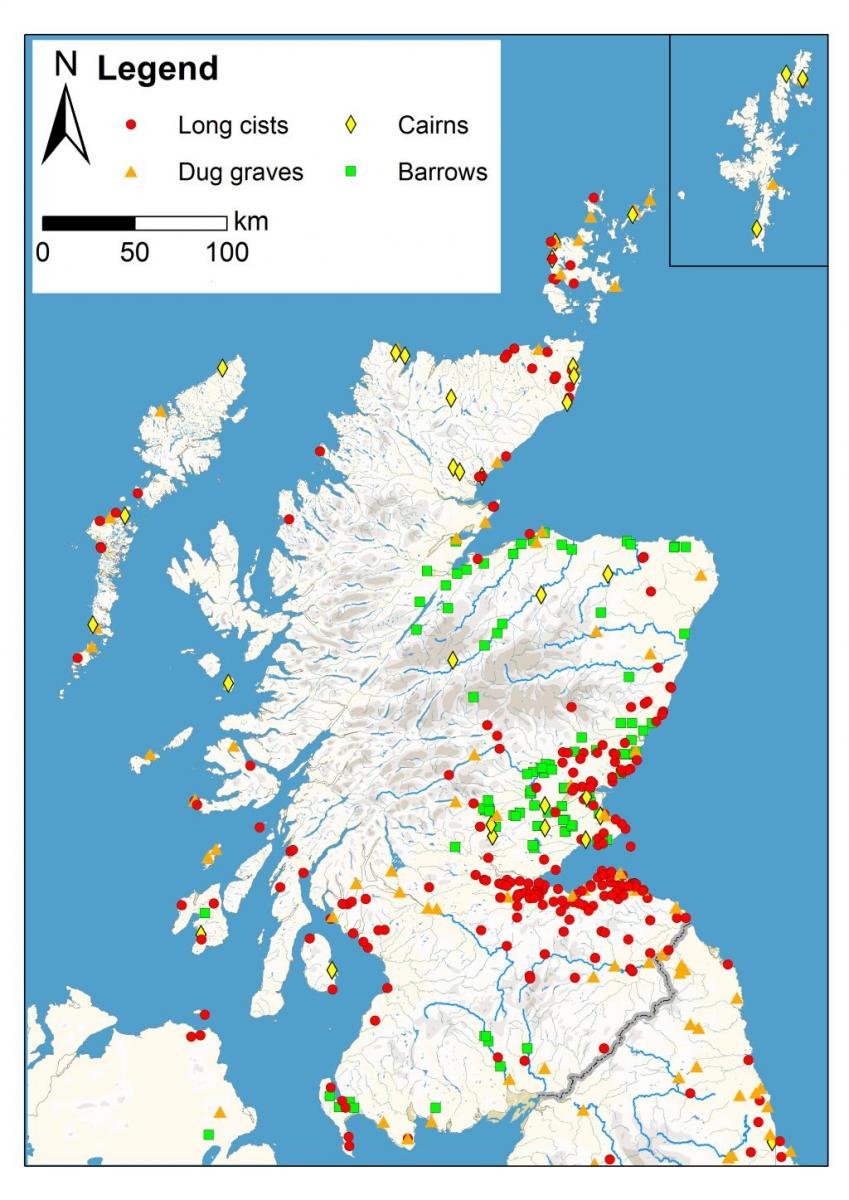 Despite the importance of ecclesiastical sites, and later Norse burials, there is very little information available on burial in the area (Figure 98). Acid soils mean that bone preservation is poor and, therefore, Iron Age burials are almost unknown. Many early medieval burial sites are still used as graveyards and so excavation is not possible. Outside of church cemeteries, the only early graves known were discovered by aerial photography at Newton (CANMORE ID 18084), Islay (McCullagh 1989). Here a linear barrow cemetery had features similar to those familiar from the Pictish areas of eastern Scotland, but now known to be more widespread (Maldonado 2012). The lack of aerial reconnaissance in western Scotland may have hindered the recognition of other examples. Apart from excavations at various sites on Iona, burials are also known at Inchmarnock (CANMORE ID 40268) and St Ninian’s Point (CANMORE ID 40437), Bute, Baliscate (CANMORE ID 294740), Mull, and Ardnadam (CANMORE ID 40746), Cowal. Most of these are simple dug graves, but there is a handful of sites with long-cists (Maldonado 2011, fig 5.5), including two important ones beneath the floor of St Columba’s Shrine (CANMORE ID 21652), Iona. It has recently become apparent that cremation burials continued into the nominally Christian period (Maldonado 2011, 106-8, Campbell et al. forthcoming), and one example has been recorded from Morvern, and another from Islay deposited in a re-used Bronze Age urn (Cook 1999), so there is potential for further recognition of this rite within Argyll in future, possibly like the Islay example associated with short cists. There is a severe lack of modern radiocarbon dates on burials of the period, and no isotopic work has been carried out so far. 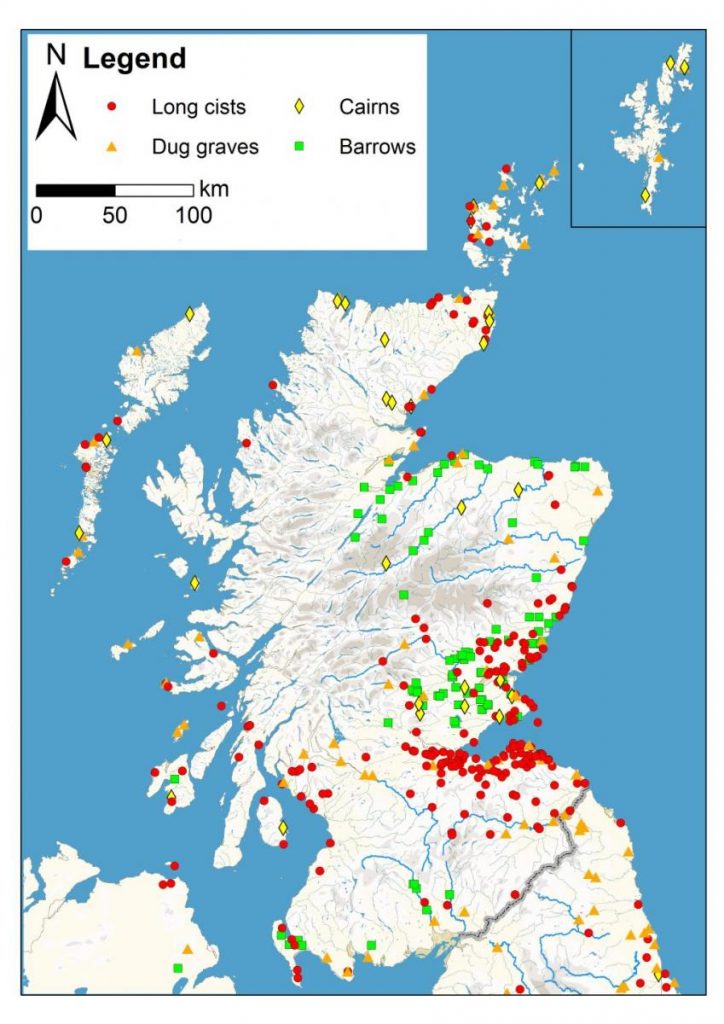 Norse period burials are better known, though not many are recorded within the area, and many were poorly excavated, hampering interpretation. The Scottish Viking Graves Project and other work on the material is in progress, but so far unpublished, though summarised recently (Graham-Campbell and Batey 1998). The pagan burials include boat burials, such as the major find at Kiloran Bay (CANMORE ID 38173) on Colonsay (Anderson 1907), and another possibly burnt boat at Kings Cross Point (CANMORE ID 40078) on Arran (Balfour 1909). Multiple graves are known, as perhaps demonstrated at Carn a Bharraich (CANMORE ID 37816) on Oronsay (McNeill 1891; Anderson 1907), although particularly problematic to interpret as this was an antiquarian find. Animal burials, as at Machrins (CANMORE ID 37923) on Colonsay where a small lap dog was included in the grave goods (Ritchie 1981) and also at Kiloran Bay (CANMORE ID 38173) where a horse was included within the boat (Anderson 1907) are known in addition to high status weapon burials, as on Islay with a major grouping recovered at Ballinaby (Anderson 1880; Edwards 1934). Elsewhere, the combination of antiquarian and stray finds with older excavations and rescue excavations at the Cnoc nan Gall/Machrins (CANMORE ID 37922) complex is demonstrating the value of re-assessment of all data sources to identify cemetery groups (see for example Becket and Batey 2014).On Iona, a burial with a rune-inscribed gravestone, (noted above) illustrate the continuing importance of the site to the Christian Norse.

The major new discovery within this region has been the identification of a Viking cemetery located south of Luss on the west shores of Loch Lomond at Mid Ross. A poorly documented earlier find had located a shield boss, spear and bent sword from the Viking period at Boiden, and excavations nearby in advance of golf course developments revealed a much more extensive multi-period complex of sites. Part of this included a massive ring ditch enclosing two burial phases (one east-west and the other north-south). Within the group of north-south grave cuts were finds including a perforated Anglo-Saxon coin, a Scandinavian whetstone, and within the enclosing ditch, a shield boss. There are potentially up to 15 individual graves represented in this phase of activity at the site (Batey forthcoming).