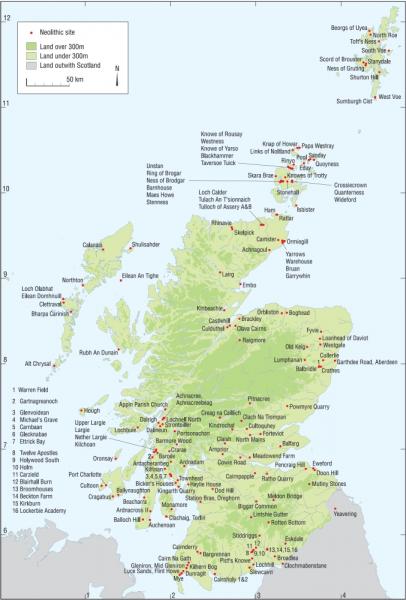 Research into Neolithic Scotland is currently at an interesting juncture since there is currently little consensus on key questions such as:

The Neolithic Panel needed to find a way to accommodate the radically differing perspectives of its own members on such matters, and so it was agreed to produce an ‘Overview’ narrative that reflects the strong beliefs of this section’s author, and yet acknowledges the main areas where opinions differ. The resulting research questions address ways of resolving differences of opinion.

Some definition of ‘Neolithic’ is required. Theme 1 introduced Worsaae’s definition – now long-since obsolete – which had been based on the typology of stone artefacts; and Childe’s definition, which focused on the production of food using domesticated plants and animals – in other words, farming. It is the latter which has been, and continues to be, the principal defining characteristic, although it is not the only one, since by the time that the use of domesticates appeared in Scotland, in northern France (whence Scotland’s ‘Neolithics’ seem to have come – see below) this subsistence strategy was associated with a range of other practices, traditions and beliefs that had not previously formed part of the lifestyle of Scotland’s indigenous inhabitants: a novel technology (i.e. pottery manufacture); new styles of artefact (e.g. leaf-shaped arrowheads) and new ways of exploiting and working lithic resources; rectangular (and other), timber-built houses; funerary monuments; and other practices (e.g. modes of deposition) that indicate the appearance of novel ways of making sense of the world. As will be argued below, within the insular context of Britain and Ireland, it does indeed appear that these novelties appeared as ‘packages’, rather than as individual traits that had been selectively adopted by Scotland’s indigenous inhabitants.

The broad-brush approach used in this theme describes the main features of what happened in Scotland from the late 5th millennium to around the 25th century BC (when metal objects and other associated Continental novelties including Beaker pottery use first appear). Indeed, this ‘Neolithic narrative’ should not end abruptly at this point; instead, some indication of the reaction to these novelties is provided, as a way of articulating with the Chalcolithic & Bronze Age Panel document.

The following division of this 1500+ year-long period is proposed here:

For each of these sections, a summary of the main characteristics will be offered, together with the main outstanding research questions.