5.3 Embedding and evading the state in civil life

The archaeology of the state cannot be reduced to a consideration of conflict alone and archaeological research allows reflection on the peace-time relationships characterising the modern state. Archaeology’s material perspective brings with it a capacity to understand the importance of frequent, small-scale and localised interactions in the construction of the modern state. As throughout, the key here will be approaching questions of the state in ways which are archaeologically meaningful. What was the role of the material world in implicating the state in people’s everyday lives? How did people respond to the state, through the medium of their material environment? How did the state manifest itself and extend its remit and authority through things, places and landscapes? What was the pervasiveness of the state at different times and in different places, and how did it effect the selves and relationships of persons, families and communities?

Research can consider questions of religion and belief, exploring the ways in which the post-Reformation national church was manifested in people’s lives and the ways in which people engaged with this church or sought to pursue other, non-conformist paths. A material perspective on state and religion might consider attempts to codify, legislate and control the practices of burial, it might consider church artefacts and architecture as means through which the established church was constituted and it might consider material manifestations of alternative practices of faith. For the latter end of the modern period in particular, analysis has to extend beyond Christian denominations to consider relationships between the state and the many religions and beliefs found in modern Scotland: Buddhist, Hindu, Jewish, Muslim, Sikh and others. How has the relationship of state and faith(s) changed through time, from the immediate pre-Reformation era through to present?

Consideration should be given to state-managed landscapes as media through which the state has manifested itself, engaged with the world and entered into people’s lives. Included here are Crown hunting reserves, the 20th-century national forest estate, military ranges and state-controlled heritage landscapes. Also included are state-sponsored interventions in privately-owned landscapes, such as the Crown-promoted development of iron production in the Highlands in the Early Modern era and associated activities of woodland management for charcoal production (Atkinson 2003; Photos-Jones et al. 1998)), as well as the promotion of cash-crop forestry in the national interest (on woodland and forest history cf. Smout 2003; Smout, MacDonald and Watson 2005). There is great potential here for work drawing on archaeological and historical evidence, and on palaeo-ecological sources and the ‘living archaeology’ of the trees themselves. And some of the most exciting potential lies in considering questions of the state in relation to the experiences and routines of those who lived and worked in rural industrial and woodland/forest contexts (e.g. recent archaeological work in relation to the WWII-era forestry camps and operations of the Newfoundland Overseas Forestry Unit (Sneddon 2007)).

Archaeological research can provide insights into the history of modern law and order and the processes and practices whereby state judicial and administrative authority was extended throughout the country. In approaching questions of the nature and meaning of state authority, research can explore institutional architecture as a technology of control (e.g.  Markus 1993; Markus 1982) and it can establish how the state administered and extended its functions in practice, through taxation, policing, surveillance and the monopolisation of violence. Conversely, we might consider the materialities of smuggling and tax evasion, civil disobedience and other ways in which the authority of the state was resisted or denied. Some salt-making sites in the West of Scotland, for instance, appear to have been set up to evade salt duties, and illicit whisky distilling was common in the later 18th and earlier 19th centuries (see Archaeologies of tax evasion – illicit whiskey distilling). It should also be noted that the limits or failings of the state ‘project’ can be explored through the material aspects of the state itself, if we look at them in a different light. In studying Scotland’s forts, barracks and military roads, for instance, we tend to focus on their origins in the Jacobite period, and pay less attention to their afterlives as infrastructure in the war against illicit economies. After the ’45, these barracks and roads continued in use in an attempt to suppress the illicit distilling and smuggling which became rife in parts of Scotland at that time; the fact that these barracks and roads continued in use in this way is testimony not so much to the power of the state, but its ineffectiveness in certain areas.

In many cases, of course, people engaged with the state and supported it, consciously and actively or tacitly, and we should consider the meaning of the state in terms of the opportunities it created. The excavators of the 18th-century township of Easter Raitts in Badenoch, for example, have argued that an increase in animal accommodation there can be explained as a response to the presence of the military installation at Ruthven Barracks nearby and the proximity of the township to the military road servicing that garrison – the township’s inhabitants providing stabling and perhaps other services to travellers on the road  (Lelong and Wood 2000). 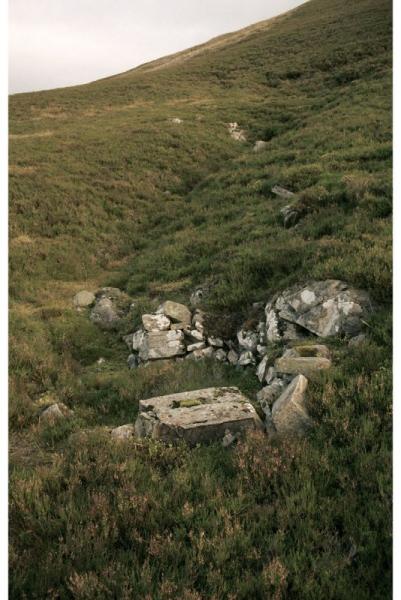