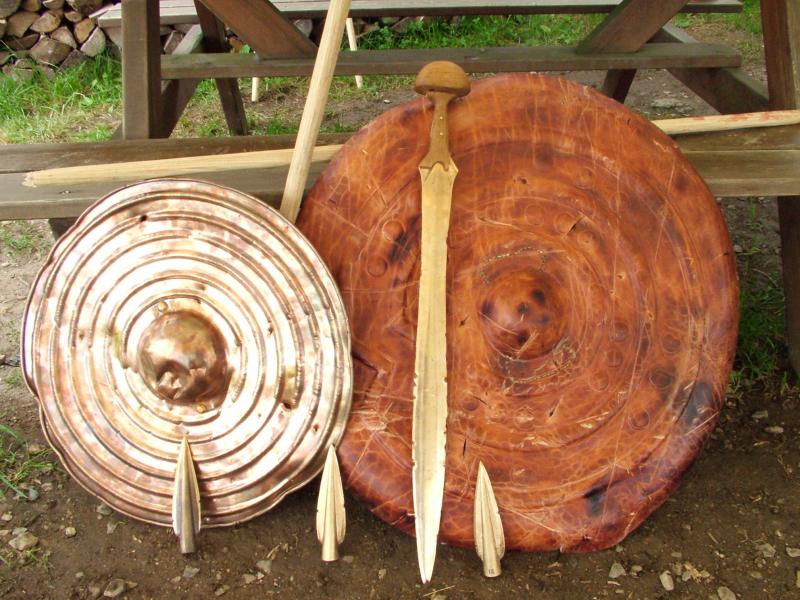 Replica weapons seen post-experiment and evidencing damage. Examination of the edges of swords in Britain and Ireland suggest they were often used in combat. © Kate Anderson

During the summer of 2009 a series of experiments looking at the damage that combat behaviours left on replicas of Late Bronze Age weapons was undertaken (Anderson, in press), with a view to comparing the results with the LBA Scottish weapons panoply and identifying common combat behaviours in the LBA. One sword, thirty-three spearheads, one metal shield and one leather shield were used to make a range of strikes, against each other and the carcass of a pig, under tightly controlled and documented conditions.

The results from these experiments were informative in terms of the original aims, as well as providing a range of unanticipated information which was to prove relevant. It was not possible to match forms of damage to combat behaviours, as subsequent metallurgical analysis suggests that latter is more dependent on the alloy involved. However, the frequency with which the experimental weapon edges became, sometimes heavily, damaged and the number of edge damaged prehistoric weapons which have only a small number of damages suggest that combat in the LBA possibly consisted of very short engagements – pitched battles lasting for hours seem very unlikely. Those involved appear to have been regularly using spearheads in the same way as a sword – that is, on a short shaft in a slashing motion. The primary modes of use of the LBA Scottish weapons panoply suggest that fighting as a unit, within a shield wall for example, would have been ineffectual; fighters would have fought individually within a melée. Finally, the level of skill required to wield the weapons effectively, and the ability to retain that skill under pressure, were clearly crucial as it became apparent that some forms of use were not only less effective than others, but could positively damage the weapon or shield of the user. These are simply the initial, most basic interpretations of a dataset which proved immensely fruitful.

The process of conducting the experiments was instructive in itself; although there are a number of clearly defined guidelines on good academic practice (Callahan 1999; Coles 1979; Mathieu and Meyer 2002; Rasmussen 2007), the unavoidable practical aspects of running a project are frequently entirely ignored. In this case, issues relating to balancing project outcomes with the available funding, ensuring adequate health and safety practices and sourcing the appropriate components, necessitated the constant meshing of practical organisation with academic theory to the detriment of neither – without which much of the project benefits might have been lost. There is considerable scope, not just within Scotland but taking a leadership role across Britain and Europe as well, to develop both more formalised instruction on how to design projects, as well as specialised support and information networks (particularly relating to the sourcing of materials, labour and products). In addition, there is a need for greater strategic direction across Europe as a whole so that experimental researchers can develop appropriately targeted projects and collaborate together on more ambitious programmes of work.