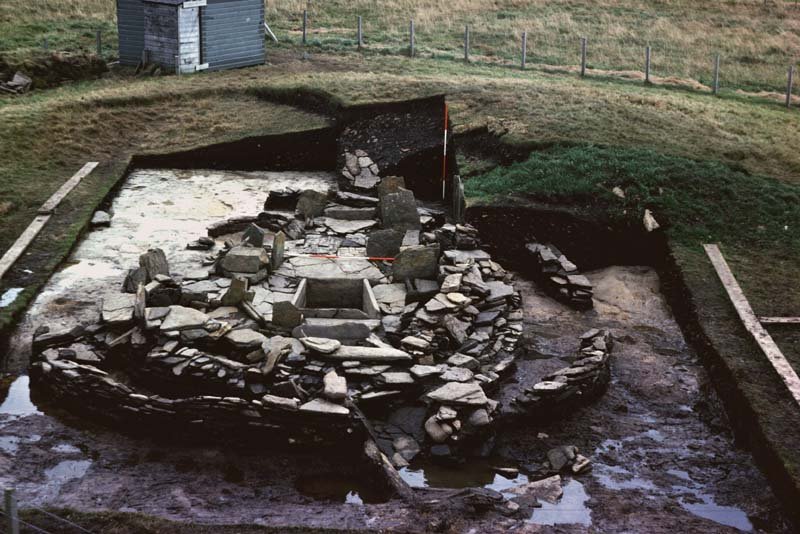 While in Ireland burnt mounds seem to have been recognised as a distinct class of monument from a very early date, in Scotland there was no such recognition. While a number of Scottish sites, now identifiable as burnt mounds, were subject to antiquarian investigation (Black 1857, Hunt 1866) these were generally identified as tumuli or burial mounds. The first explicit reference to a ‘burnt stone tumulus’ does not come until the late 1860s (Mitchell 1870). In 1873 Anderson made the link between mounds in Caithness and Shetland, and the Irish fulacht tradition, but despite this connection there were doubts expressed as to their function as a cooking place, and the continued implicit interpretation in many of these early accounts is that they form a part of a funerary tradition. Following this period of early antiquarian activity there was little work carried out on Scottish burnt mounds until that of Hedges in Orkney (1977). Hodder and Barfield (1991) edited a volume on burnt mounds, and several of the interpretations within are worthy of further pursuit.

There are currently over 1900 burnt mound sites recorded in Scotland, with the highest concentrations occurring in Shetland, Orkney, Caithness and Sutherland, and in Southern Scotland around Dumfries and Galloway. It has been suggested that this distribution is representative of the original spread of hot stone technologies (Hedges 1977, 61), however it is noted that these concentrations coincide with areas where the Royal Commission has recently carried out survey. It should also be noted that while fewer sites have been from the west of Scotland, many of these have been discovered through developer‐funded work, rather than systematic survey, therefore much greater concentrations may exist than are currently recognised. Historically there has been a significant degree of variability in the recognition and recording of burnt mound sites in Scotland. Prior to the revision of mapping in Orkney in Shetland undertaken in the late 1960s and early 1970s, the OS field sections had little experience of burnt mounds, and consequently very few were recorded in the mainland. The Royal Commission’s survey teams also underwent a similar process following the survey of the East Rhins, as a result of which a greater number of burnt mounds were recorded in 1986 than had been recognised the previous year (Halliday 1990, 61). These factors make it difficult to come to any meaningful conclusion in relation to the overall distribution of the sites at present.

Over half of the records of burnt mounds include information about shape, however the terminology employed in describing this is variable. The classic crescent shape is described variously as U‐Shaped, Crescentic, Kidney Shaped or Banana Shaped. Other significant shapes recorded include oval and circular, while shapes such as pear or triangular make up less than 1% of the recorded material. Around 65% of the sites recorded also contain information about mound size, which allows us to build up an overview of their relative volume. The value of this data in determining the number of firings that took place is contestable, however it does present us with some interesting considerations. The majority of mounds are found to be smaller than 20m3, but can range up to 900m3, at Vaasetter in Fair Isle. Mounds in the South are found to be smaller than those in the North. Likewise smaller mounds are found in greater densities than the larger, suggesting repeated phases of short lived activity rather than continued usage over a period of time (Anthony 2003).

Although less than 3% of the sites recorded have been examined in any detail, those which have reveal an array of complexity and variation between the sites. Excavation af sites in Orkney (Hedges 1977, Shetland (Moore & Wilson 1999, 2001, 2008; Hedges 1987) has revealed complex internal structures, as well as a range of associated finds. Survey and excavation in the Northern Isles has also revealed a complex series of relationships between mound sites and other prehistoric monuments that warrants further attention (Dockrill, Bond & O’Connor 1998, Hedges 1986, Owen & Lowe 1999: 35‐37,). Work undertaken by Anthony (2003) in mounds from the Northern Isles has not only expanded their temporal range beyond the Bronze Age, but has also been instrumental in illustrating successive phases of construction and use at the sites, and can provide insight into the complex timelines which these sites can possess. Programs of geophysical survey have demonstrated the suitability of magnetometry in identifying burnt mound structures (Hunter & Dockrill 1990).

A number of directions can be identified which would aid and develop an understanding of burnt mounds and their contribution role in understanding the Bronze Age of Scotland. Although a number of excellent programs of excavation and survey have been carried out, much of the current knowledge is still reliant on work being carried out in rescue or developer funded contexts, and it is argued that targeted research driven investigation is required in order to fully understand the role of these sites within a wider Bronze Age context. It is also noted at present literature on Scottish burnt mounds is dominated by work being carried out in the Northern Isles, and it is suggested that similar programs of research are required elsewhere to determine the relevance of this material in relation to mounds elsewhere in Scotland. In particular, the following are suggested: